After completing the training, teachers will be able to plan and execute eight specific activities for their classrooms, and build on that knowledge for additional lessons. Participants will also be connected with a growing circle of trainees with whom they can exchange ideas around their implementation of the pedagogy in their practice.

The online version of this training will launch in 2023 and will feature an exciting, interactive learning experience. The 2023 summer training sessions are already being planned, and trainers are being prepared to present these face-to-face classes. 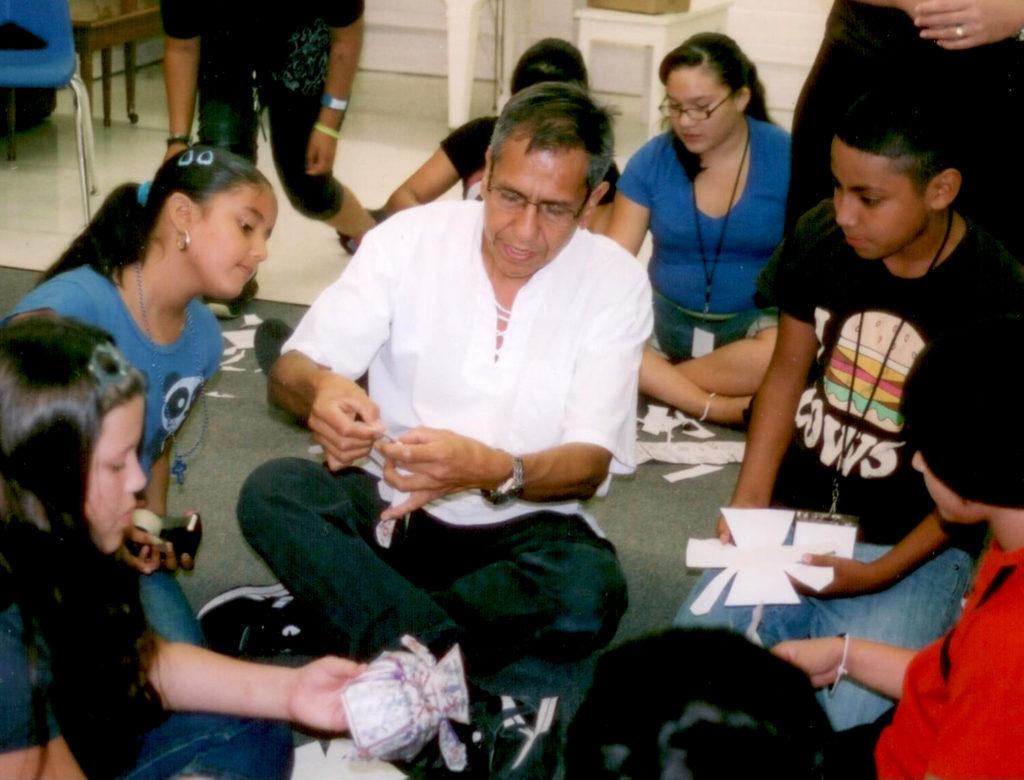 The word Xinachtli is a Nahuatl word describing the moment a seed germinates. There is nothing more powerful than a seed. A seed can crack a slab of concrete with its sprout. It can lay dormant for decades and awaken with its fruit. A seed is powered by the full intent of the Universe, designed by Creation to explode with Life.

The Xinachtli Project is an indigenous based, multi-language pedagogy developed by El Paso educator Carlos Aceves, M.Ed. Over a fifteen-year period, this method has proven effective in significantly raising the academic attainment of the elementary school students that Aceves teaches. The Xinachtli method introduces students to their ancient, indigenous ancestors’ belief that there is a self-evident relationship between everyone and everything. The students learn how to see academic subjects as natural elements that are directly related to their lives. Xinachtli integrates language arts, math, science, and social studies into single lessons, learning station activities, and whole class encounters. This interdisciplinary approach is the “natural way” that indigenous education is conceived, processed, and delivered for all students. The Institute is working to introduce this unique and successful pedagogy into the Texas public schools system.

Constructivism, inquiry based-lessons, higher order thinking skills, multicultural education; these head a list of approaches that public education is attempting to implement across the curriculum. They emphasize a more progressive form of learning. Constructivism views learning as a process of creating knowledge rather simply storing information. The inquiry approach builds upon the scientific process as a means of guiding students to more in depth efforts of learning. Multicultural education is a response both to the global economy as well as the growing amalgamation of world cultures in the United States. These modes of learning place teachers more in the role of facilitators than dispensers of knowledge. Hands on activities, working in teams, learning centers and assessment that cannot be restricted to simple letter or numerical grades are also being encouraged. In this atmosphere educators are seeking models through which they can implement a more integral pedagogy. The Xinachtli (Sheen-ach-tlee) Project, a way of approaching all subject areas through concepts rooted in the Mesoamerican tradition, can be a very useful model for public education’s attempts into higher realms of learning. From 1996 to 2007, the Xinachtli Project was applied by several teachers at Canutillo Elementary with an effectiveness that significantly contributed to the overall academic success of the school, going from a campus rated by the state as being in the bottom half to the top 25 percent. It has not, however, been transformed into a set curriculum so that its lessons and approaches can be used by others. It is our goal to eventually do just that. There is no literature per se on this model of education, namely because it is relatively unknown, yet its methodology is quite compatible with progressive contemporary notions of pedagogy. It is very much a constructivist model, promotes in depth inquiry, explores key concepts of social and cultural relations, and mirrors a concept that is best described as “applied chaos theory.” For example, a classroom is organized so that each learning center reflects the activities of the whole classroom (by kome okiomah). The schedule contains time for individual and group work, learning center activities, and free time. A Xinachtli activity can be as little as one lesson a week to daily lessons, depending on how much a teacher wants to use this pedagogy and how effective she finds it. The concepts of Xinachtli are universal in that they reflect principles developed out of the human effort to build a civilization where people see themselves as an integral part of the natural cycles. Its scientific grounding comes from fomenting a respect and awe at the vastness and complexity of Nature. This experience allows the creation of pedagogical models where learning is drawn on the natural state of children’s inquisitiveness, playfulness, and awe of the simplicity of such things as planting and watching a seed sprout.

I have been a public school teacher for over twenty years, teaching kindergarten, first and second grade. The Xinachtli Project was my motivation for entering this field and quitting a good salaried position producing instructional television for the local community college. ​ In 1990 I attended a small gathering of Chicano educators in Arizona where the idea of a Xinachtli project was discussed. The plan was to develop curriculum grounded in Mesoamerican spiritual tradition which taught the complex systems of mathematics, philosophy, agriculture, and fine arts. All of us had been exploring these types of new teaching methods as cultural workers wanting to bring awareness to our community about our rich indigenous heritage. ​ Upon returning to El Paso, Texas I set about this task with help from some of my friends who were teachers in the public school system. What I discovered in Xinachtli were universal principles and a natural form of learning. In 1992 I became a public school teacher myself. ​ I believe that Xinachtli pedagogy is ready to be translated into accessible curriculum for teachers not only in the Mexican American community but all those who seek more progressive modes of teaching in their classrooms. Xinachtli builds on the human ability to form symbols and on mythic pedagogy to facilitate natural understanding of the world in which we live. ​ Xinachtli, much like chaos theory, views the time of the sprouting of a seed as the point in which the seed is neither seed nor plant but a moment of infinite possibilities. Andy Groove, former chairman of Intel Corporation, said on the Charlie Rose show that the future belongs to those who understand and apply the non-linear formation of structure to institutions. His words, more than any others, describe what occurs when we use Xinachtli in the classroom. I look forward to sharing this exciting curriculum with all those who are interested in a bold new approach to public education. – Carlos Aceves

One is the Sun

One is the Sun

Two is the Earth

Three are the Animals

Four are the People

Five is the World

Six is the Sky

Seven is the Moon

Eight are the Birds

Nine are the Seasons

Eleven are the Waters

Thirteen are the Stars

No culture can survive if it attempts to be exclusive.
– Mahatma Gandhi

When a social group feels it needs to impose on the resources of another group, its members do not simply tell themselves it is “time to act like thieves.” Rather they seek ways of justifying their actions. At that point, they might begin differentiating themselves as “civilized” while others are labeled “uncivilized.” For example, the official script is that the United States is in Iraq not to possess the country’s oil wealth but to “bring democracy” to an “undemocratic or backward” society. All cultures that become imperialistic begin creating an ideology that presents their culture as normal and civilized thus justifying their imperialism. Thus, they give themselves an “exclusive” right over those on whom they impose their power.

When I decided to draw upon my Mesoamerican heritage as a source to recreate a process of undoing whiteness in the classroom, I faced a dilemma. Was I recreating the colonial process described above by focusing exclusively on my own ancestral culture? I resolved this contradiction through focusing on process rather than content. I realized that the initial attempt of all groups is to create a means of survival for their culture and ensure the survival of coming generations by passing on this knowledge. The need for the “exclusivity” of that culture arises only when the original structure created by the group is transformed in an attempt to take and control the natural resources of other groups.

When I started attending Canutillo Elementary School in 1960, I encountered overt racism and a sociopolitical message that wreaked havoc with my self-esteem: to be Mexican was bad. Only through the Chicano Movement almost ten years later did I realize I was being conditioned to occupy a lesser position within the political and economic system of the United States, a society that had long ago become imperialist and colonialist.

Throughout my schooling the invasion by the United States of Mexican territory had been justified by portraying Mexico as an undemocratic country. Texas had been severed from Mexico because its new residents wanted “freedom.” Arguments in favor of the taking of the rest of Mexico simply followed the same reasoning. As my seventh grade history teacher told us, “The Mexican-American war was just as important to Mexicans as it was to Americans. Mexicans would finally have a free country to live in.”

However, my anti-imperialist consciousness which developed through the Chicano Movement helped me not to abandon the idea of using cultural awareness as a pedagogical tool in a similar way that we had used Mexican American culture as a weapon against white supremacy. Within the roots of any culture, there are the human aspirations for freedom, dignity, and artistic expression. As cultures become imperialist or subjected to imperialism, these aspirations become distorted and suppressed but find their way across history in the form of social struggle that often shakes the foundations of the contemporary society in which they now operate. The Xinachtli Project evolved under these circumstances and conditions.