Roberto Cintli Rodriguez’s Our Sacred Maíz is Our Mother: Indigeneity and Belonging in the Americas is a cogent and penetrating discourse that links maíz culture to the root of American continental civilization, its origins, and axis mundi; it further shows its impact to the modern world with its ceremony, spirituality, language, nutrition, and a deeper respect for our Sacred Earth.

The work is divided into a prologue, introduction, six chapters, an epilogue, and three appendices. Rodriguez prefaces each chapter with an oral historical/cultural narrative from the ancient tradition. The first three chapters establish a foundation on the ancient past, the maíz narratives and the respective counter narratives; he uses cultural and historical data to give the reader an understanding of the historical, cultural, and political consequences of a people who have suffered an invasion of values, life, and worldview. Chapters four through six bring the foundation of the past into the present cultural milieu: maíz as civilization impulse, a return to the root and the new axis mundi.

The first objective of Rodriguez’s work is to focus on the responsibility that we have to know and understand the “other world perception.” One way is to decolonize oneself and relearn from the ancient and original sources. Academia has coined “Mesoamerica” as a geographical term viewing its people externally as opposed to internally, that is, from its philosophical and metaphysical foundation as represented from native culture, ceremony, and thought. It is via the examination of maíz and its continental contribution that a higher philosophical and metaphysical paradigm can be constructed. It is the invention of maíz that gave rise to the migration of corn culture along with numerous varieties of chile, calabazas, nopal, camote, tomate, papas, etc. Still, it is Teotl Cintli that is the precursor, dating back to 7,000 to 10,000 years.

Other objectives of Our Sacred Maíz is Our Mother include decolonization, deindigenization, and recognition of orality as existing historical and cultural memory. It was the knowledge keepers who kept the social and philosophical record via Teo Amoxtli. When the Spanish invasion and destruction of the Confederaciòn de Anahuac was complete, the last ruler, Cuauhtémoc, gave the edict that from thereafter, the knowledge of the ancient past shall be transmitted orally from generation to generation.

After examining the background, Rodriguez frames his arguments by examining three types of narratives in current U.S. society. The first focuses on Mexicans, Central Americans, Chicanos/as, and other groups as a people belonging to the continent. The second set includes the Aztlán resistance narratives claiming both as Indigenous and the Southwest as a homeland. The third set examines the portrayal of Mexicans and Central Americans as illegitimate, aliens, and inferior, from barbarous roots. The latter revolves around problem areas of misinterpretation and erroneous translations that give rise to misperceptions. This is due to a lack of valid cultural insight leading to negative and erroneous consequences.

Maíz culture today permeates throughout the Americas; it is communicated both internally and externally in post-invasion times through orality and history via cantos, poetry, huehuetlatolli, song, and danza. While post-conquest works tried to rid the ancient indigenous thought, hidden meanings were concealed for those who understand the old metaphysics. The imagery derived from pre-Cuauhtémoc times become tools for counter-narratives in times of insurgency, such as the post-Mexican revolution muralist movement; poetry, art, and muralism in Canto al Pueblo; the United Farmworkers labor movement; and Chicana/Chicano publications to name a few. Images of the serpent, nopal, eagle, and Virgen de Guadalupe, for instance, become symbols of roots; each has indigenous equivalents with the ancient culture: The Virgin is our sacred Mother Earth, Quetzalcoatl is the creator of maíz, and Tlaloc is the force of rain. The impact of maíz goes beyond being a world staple or a super food for nutrition along with beans, squash, amaranth, chia; it is a living culture that continues with a myriad of festivals—such as tamaladas and quinceañeras—many of which are thousands of years old. While most deindigenized people are not connected to tribes, there is nevertheless a cultural resistance that is hungry to recapture tradition. There is a need to understand that Centeotzintli represents origin, life patterns, and counting of time.

According to Rodriguez, the Indigenous imagery exploited by friars was a subversive act of syncretism; they were inquisitional ploys that used the demonic metaphor that divided the Native American and the Eurochristian world. Moreover, Europeans reduced Indigenous history to myth, legend, and folklore. It is this ancient knowledge that Rodriguez calls historias profundas, that is, histories connoting depth and antiquity. Thus, reframing the western cultural master narrative is imperative; academia and public education need to see that the invasion of the Americas was a reframing and erasure of the existing cultures. The new paradigm of identity has varied in the U.S. since the sixties; there has always existed a number of Spanish-surnamed mestizos and indígenas who are rooted spiritually to Indigenous roots. This group can show that fear is a colonial tool that affects the cognitive unconscious. They need to demonstrate that colonial roots marginalize and trivialize Indigenous culture.

Our Sacred Maíz is Our Mother captures a corpus of important materials and ideas written by past Maestros in Mexico and the U.S. as Rodriguez reframes the discourse academically and in an intelligent manner; most importantly, he gives the ancient tradition a legitimate place in the discourse of academia.

Yana Wana’s Legend of the Bluebonnet 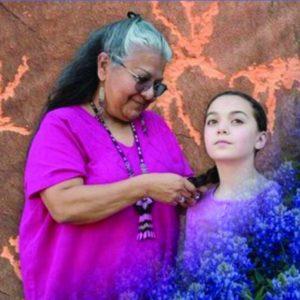